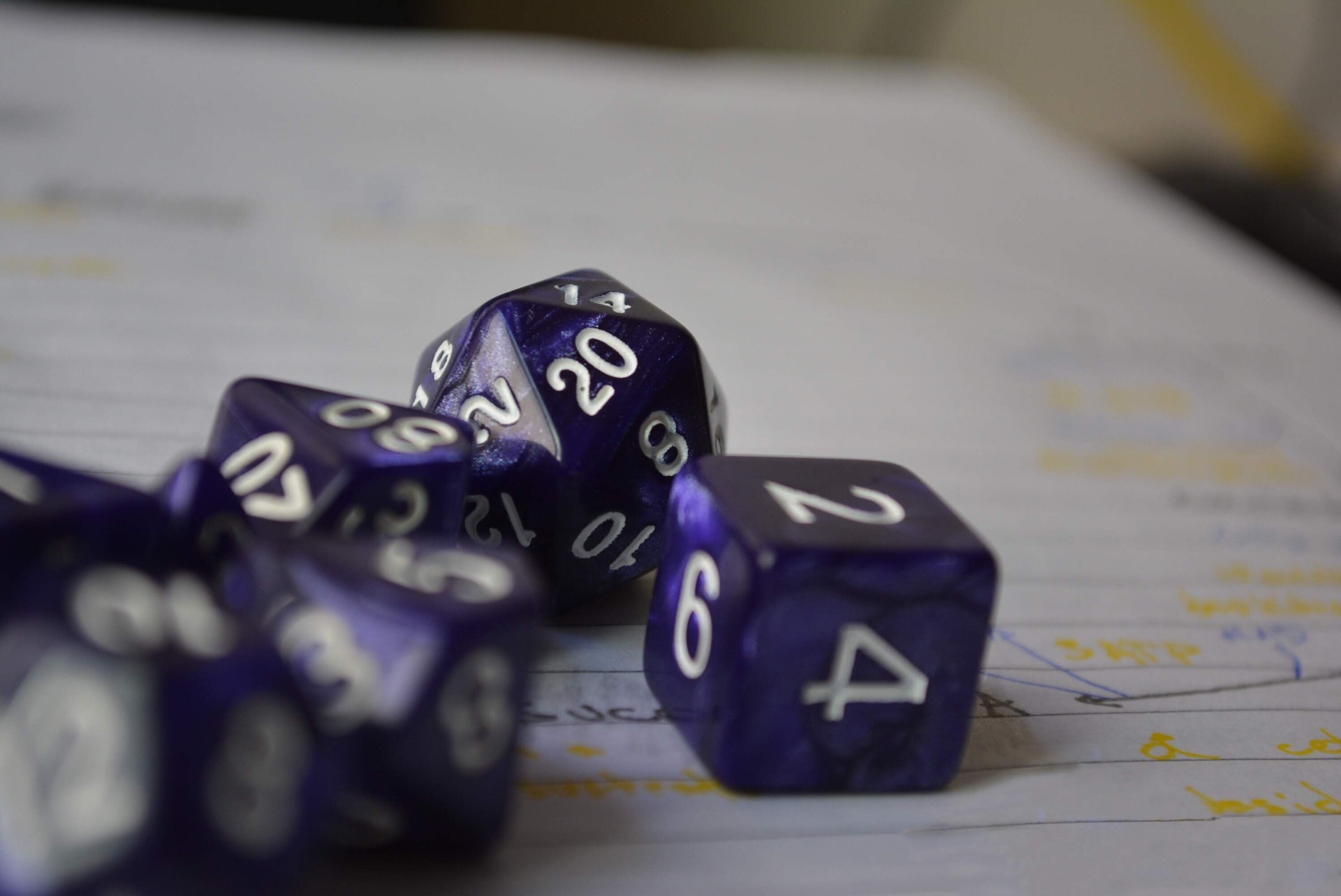 Why we roll dice?

In a nutshell I see two reasons:

The common take seems to be that we roll dice to resolve an uncertain situation. I think we actually use them for the opposite reason, not to resolve but to add uncertainty.

Take D&D. If a character thrust their sword at an enemy there is no uncertainty whether or not they will hit: the character is proficient, their enemy is at an arms length, they should be able to hit, and yet they might not.

We roll because the obvious outcome is precisely that: obvious. Maybe even boring.

In The Veil, and other PbtA games, we roll dice as a result of moves, that might be exclusive to a character. A move is a roll that triggers whenever a character does an specific action; always.

Investigating might be a specific move for me, but not for you. So I roll and if I fail I’m rewarded with experience and something will happen: a hard move on the part of the MC. Taking the chance pushes the world forward by design.

We roll because fail or success new elements will show up on the game.

How do the dice work?

There are two maths concepts we need to talk about:

Independence means each one of your dice rolls is unaffected by past or future rolls. No you are not “burning” your 20s and your dice are still rolling as good as they’ve always have.

Distribution is how the probability of certain numbers is affected by how and what we roll. When we roll a single dice each number has equal chance of showing up. 5% for a d20, 16.66% for a d6. 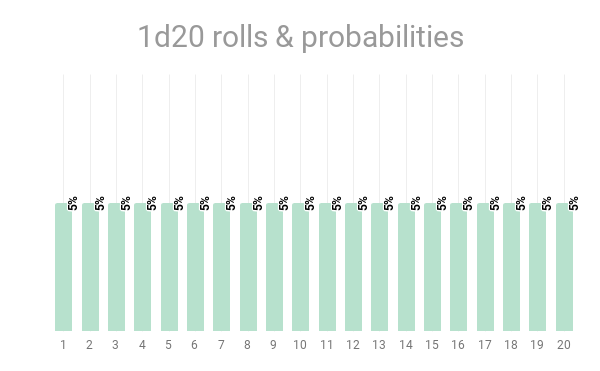 1d20 rolls and their probabilities

A 1 is just as likely as a 20, both are as likely as an 11. They don’t roll more or less often than other numbers, as our minds tell us. We assign meaning to them because that is what the book does, so 1s seem more frequent than they are and 20s less than they truly are.

If we roll multiple dice we are now rolling on a curve. Certain sums of numbers are more likely to show up because there are more combinations that make them. On 2d6 a total of 2 has only 2.7% chance but a 7 will show up 16.6% of the time. 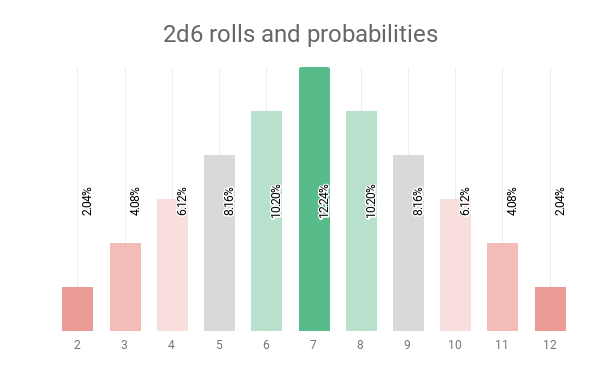 2d6 rolls and their probabilities

Rolling a single d20 in D&D this makes everything more reliant on your stats. If you have a +0 against a DC 15 you only have a 30% chance of success. Bonuses to checks, saves and attack rolls are required to be effective as a campaign progresses and enemy AC and DC ever increases. 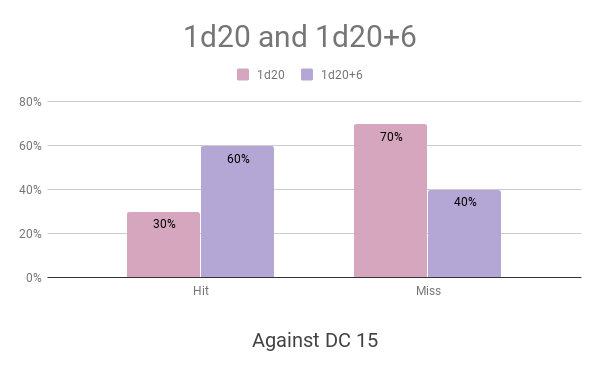 d20 probability of hit and miss

In The Veil and other PbtAs the dice are stacked to succeed. Most moves have three possible outcomes: miss, weak hit and strong hit.

A weak hit is a success at a cost, while a miss is a “golden opportunity” meaning the MC will make a hard move, introducing something perilous for the characters. 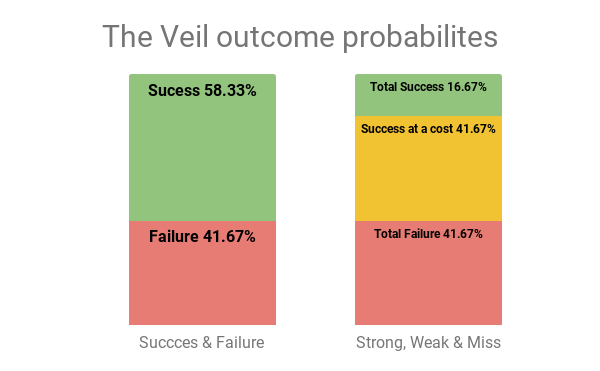 The Veil rolls and their combinations

Dice are not #random. Dice are Random in the statics sense.

When do we roll?

In the case of D&D when there would be consequences of failing and in The Veil whenever a move triggers.

More in depth: the responsibly of when to roll falls on the DM in D&D. It is the DM who asks for rolls when they can see a consequence of failing. This why you often hear advice akin to: “you don’t have to ask rolls for everything”

Only call for a roll if there is a meaningful consequence for failure.

This is because, in part, it is hard to come up with consequences for everything. So if the DM asks for a roll, the characters fail and there are no consequences it quickly becomes the kind of game where PCs roll -> fail -> nothing happens. The DM expected a success on a roll for the story to progress and the PCs get frustrated with the inaction.

Meanwhile in PbtAs the responsibility of when to roll falls on the mechanics themselves. The rules read “to do it you have to do it” meaning if a move would trigger then it triggers and a roll is required. Not optional.

Moves are written in a way that reinforce the character’s archetypes and make them significant to their actions. For example:

Lady In Red. When you change your appearance within the constraints of the digital roll + Cyberbrain

It does not seem like a big difference. But here the mechanics make it easier to come up with consequences. Those consequences are most likely linked to an specific character’s actions and not to the group, or the world. So the consequence is personal and it will sting.

How does the dice affect the tone of the game?

This is the advice part. There are two ways I see this affecting any RPG

In D&D. Players shouldn’t feel the weight of success or failure when they roll, because they are not failing or succeeding; they are adding a new thing to the world. They didn’t failed to open a door, they triggered a ticking sound in the room. They didn’t failed to hit an enemy with an arrow, they destroyed a lamp and the fire will quickly spread trough the ship. In games I run neither the sound or lamp were there before, they are now, as a result of the dice.

The Veil and many systems use degrees of success. Try adding success at a cost to checks. Specially if you expect the characters to succeed. This way the players look forward at how the world is affected by their actions not just a number.

And keep making those numbers less significant. As mentioned in the previous section, D&D depends a lot on stats because the way rolls are made. This is why you see so much advice geared towards automatic success.

If as player you get frustrated by 1s maybe it is because this was the one roll you got to make during the session. Contrary to a lot of advice try to roll more often. If you roll twice in a session the probability of rolling a 1 both times is only 0.25%. The 1s get quickly drowned in the rest of the rolls.

This are the mechanics behind the failing forward advice; letting players roll again, will get them out of trouble, it isn’t just a narrative device, it is backed up by the maths. However, every time something new must be added to the world, otherwise why roll? just succeed.

This is why I think D&D favors a Gonzo Tone. A bizarre, crazy tone where players roll often, and failures are as exaggerated as successes are heroic. While to me this comes from pulp fiction DNA of the game, it is where the mechanics push the game towards.

So. Try to roll more, while integrating successes at a cost. You might find players take more risks and are more willing to roll, and isn’t that grand?

Thank you for reading this post! I’ve been thinking about this since someone I follow on twitter talked about being frustrated at their dice. If you want to try The Veil you can get it here.

I’ve been trying to write in english recently since I published my first D&D adventure Arcane Moon! You can read about the process of creating it, and you could try Google Translate and my post on a mathematical analysis of the Bag of Holding. Or how we play D&D online or my first impression playing The Veil